It’s no good: Poetry as resistance?

Crossing the borders between poetic and political, giving the voice to the yet unnamed, contemporary Russian poetry exists at the cutting edge of the contemporary cultural process.

About the Participants:
Poet, performer and columnist Lev Rubinstein (Moscow, 1947) is one of the founders of Russian conceptualism. His poems push the boundaries of what can be said verbally, visually and performatively. With his passionate social engagement and nuanced personal statements, he is a role model for the young avant-garde. Pussy Riot poses for snapshots beside him, and his blogs and Facebook posts unleash a flood of responses. His work has been translated into many languages.

Born in Moscow in 1975, Kirill Medvedev has recently emerged as one of the most exciting, unpredictable voices on the Russian literary scene. Widely published and acclaimed as a poet, he is also an activist for labor and a member of the Russian Socialist Movement Vpered (Forward). He contributes essays regularly to Chto Delat, and other opposition magazines. His small press, The Free Marxist Press – SMI, has recently released his translations of Pasolini, Eagleton, and Goddard, as well as numerous books at the intersection of literature, art and politics, including a collection of his own essays. “It’s no good”, Medvedev’s collection of poetry, has been published in English, Dutch and Estonian.

Maria Stepanova is a poet, essayist, journalist and the author of ten poetry collections and two books of essays. She has been awarded several Russian and international literary prizes. In 2018 and 2019 Stepanova is working as a Siegfried Unseld guest professor at Humboldt University, Berlin. She is also the founder and editor-in-chief of the online independent crowd-sourced journal Colta.ru. Colta.ru covers the cultural, social and political reality of contemporary Russia, with an audience of 600 000 visitors a month.

Sasha Dugdale is renowned as a translator of poetry, and has published numerous books of poetry and plays translated from the Russian, as well as four collections of her own poetry – most recently Joy (2017). As an editor of the acclaimed magazine Modern Poetry in Translation, she had launched a special issue devoted to contemporary Russian and Ukrainian poetry: “War of the Beasts and the Animals”, published in 2017.

The event is free and open to the public. 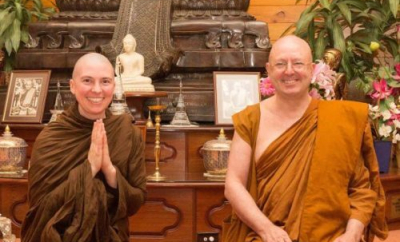 It’s Not Your Fault!

A talk with Ajahn Brahm and Ayya Canda